Who can use this feature

The Google Analytics feature lets you measure the popularity of your video and site. Analytics tracks and reports the web traffic on your uploaded videos and advertisements by providing comprehensive data such as the number of clicks, total and average time viewed it was watched, and geo-based location of where the video was played.

You can find analytics in these back end sections:

The Google Analytics feature lets you measure the popularity of your video and site. Analytics tracks and reports the web traffic on your uploaded videos and advertisements by providing comprehensive data such as the number of clicks, total and average time viewed it was watched, and geo-based location of where the video was played.

You can find analytics in these back end sections:

Channel Analytics provide insight into the number of plays and the amount of time viewed for all video content on your platform.

Analytics is unique per channel for those of you who have the multi-channel feature.

If you are on a single-channel platform, simply look for the Analytics tab under Channel Settings in the backend admin panel.

If you are on a multi-channel platform first select the channel that you want to view and then look under Channel Settings for the Analytics tab.

Start by selecting a preset period or custom date range.

In the Analytics page by default, you will be presented with data aggregated from the previous 7 days. If you want to see the number of plays from a different time period, you can choose one of the following under

If you choose this option, then click the start date and end date fields to select the desired dates in the calendar that appears.

Any other preset date selected will automatically update the From and To fields.

After selecting a time frame, the Analytics information will display the data collected within that time period in three categories as explained below. 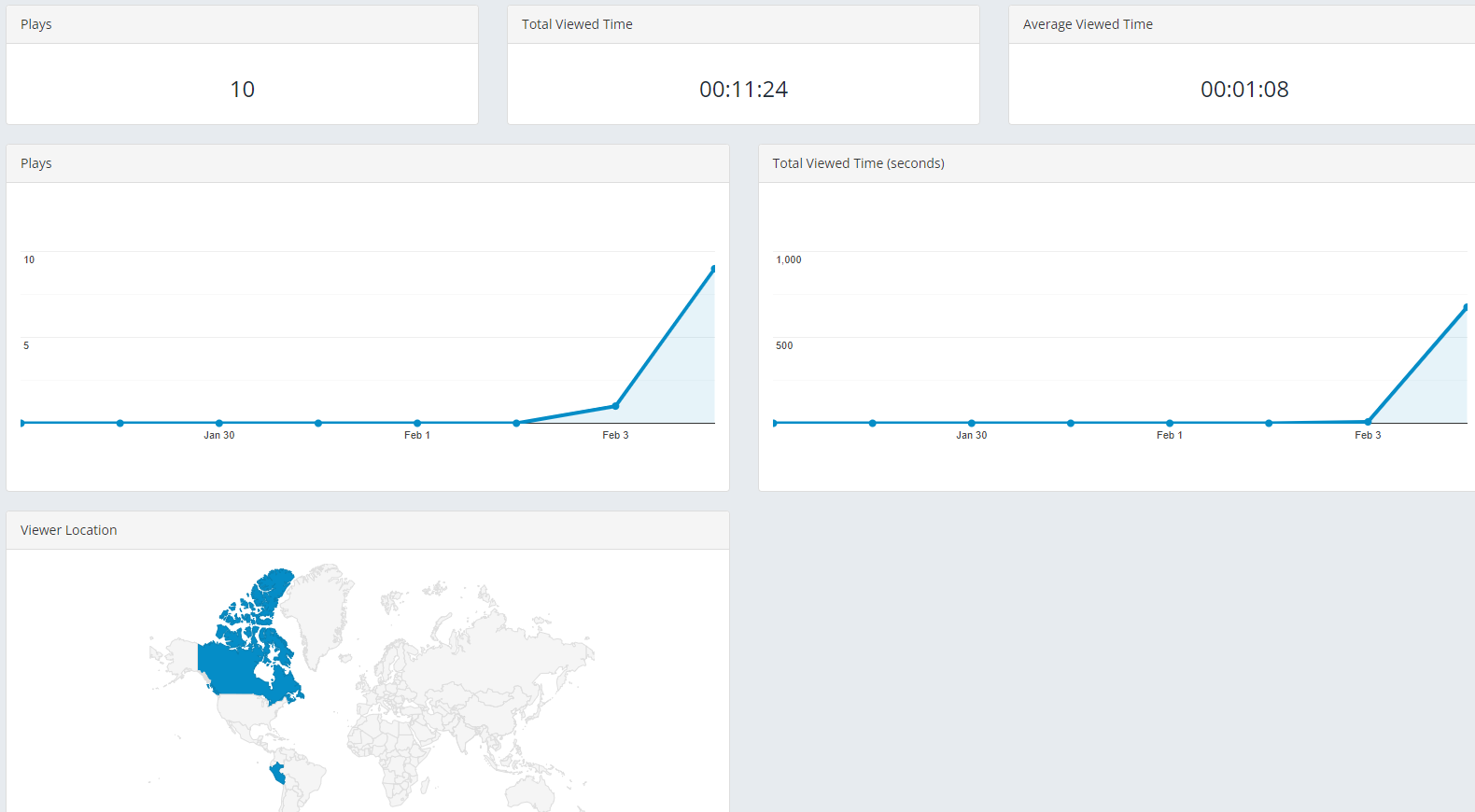 This section displays the number of times the play button has been clicked each time someone goes to watch a video. The data aggregated here is the total number of plays of all videos on the selected channel. When hovering over the data bullet points on the graph it will provide visualization of the number of events that occurred on a particular date.

The data shown in this box is the average of the time spent by a viewer on videos throughout the selected channel.

This data shows where your viewer is and provides a highlight on the country it is being accessed from.

A filtered list by most plays or most viewed time is provided at the bottom of the screen to see the data per video from your library. You can also see more detailed information on that video by clicking on it, which will direct you to its container Analytics page.

To get analytics on a particular VOD container, first, choose a VOD in your library that you want to Edit, and then select its Analytics tab.

The Analytics tab becomes available only after there is a video that has been successfully uploaded and processed.

For example, in the screenshot below we have a total of 5 plays.

In the “Plays - Percent Watched” box you can see how many out of those 5 plays actually made it all the way through to the end of the video, which was none of them.

Watch the video below to learn more about VOD Analytics.

The Analytics tab becomes available only after there is a live stream input linked to the containers Event > Stream page.

Watch our video called “ Initializing a stream” and “Library and Live Event Overview” on how to do this.

Watch the video below to learn more about Live Event Analytics.

To get the stats on advertising, also known as Pre-Roll videos, select the Advertising tab on the left-hand side under the channel settings, and click on the blue graph icon under the stats.

It will direct you to the analytics page of the whole campaign and displays the combined data collected from all the pre-roll videos under the selected campaign.

Data shown in the form of the infographic are further explained below: 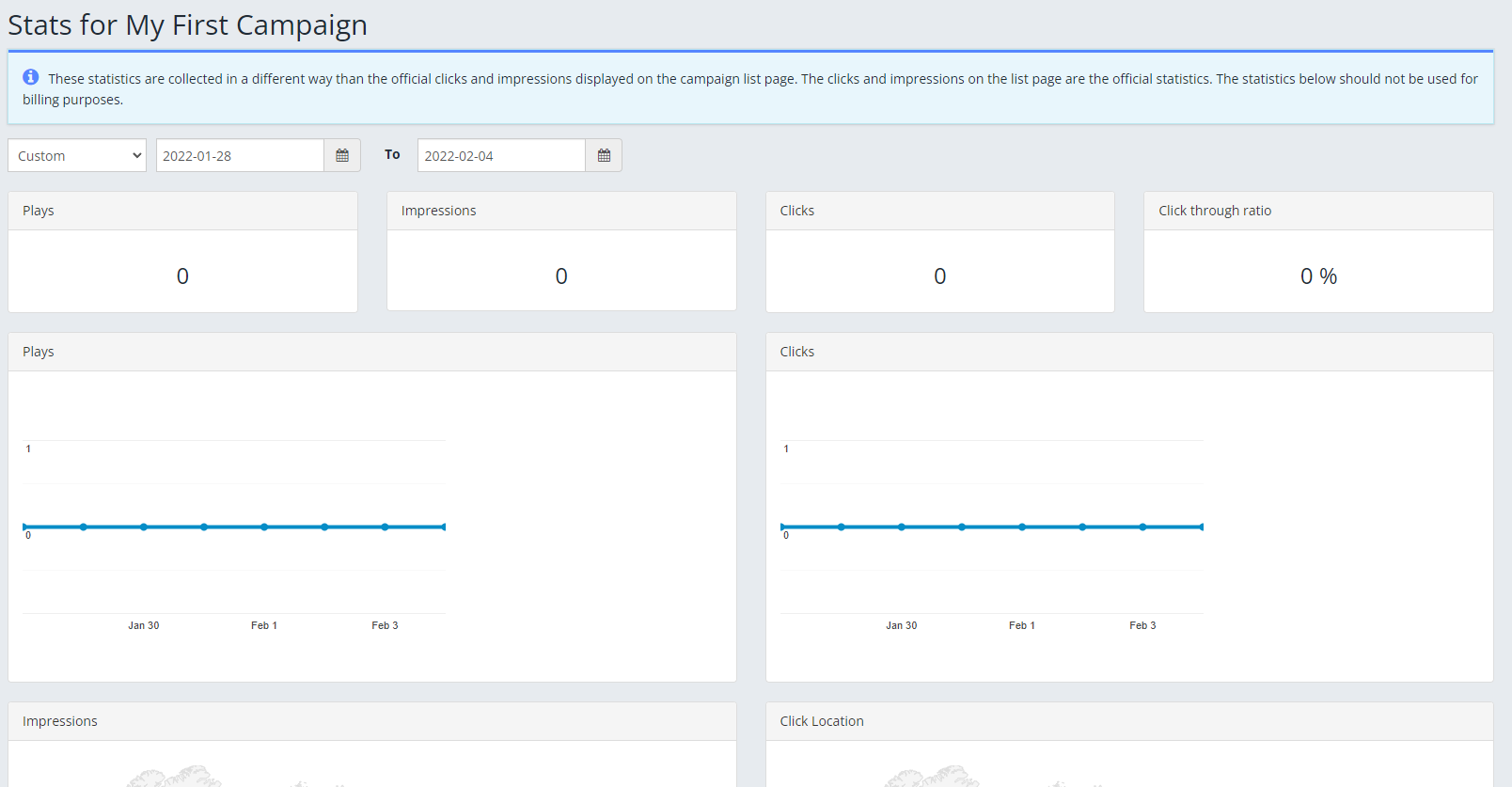 The data shown under this box is the number of times the advertisement was played at the beginning of the video. It is shown in both numerical form which displays the total number of plays and the other is the graphical representation breaking it down by the day.

Bullet points can be clicked or hover over them to see the data gathered for that particular day.

This display box gives you the data on the number of impressions registered on all the pre-roll videos combined, under the selected campaign. Impressions are registered when the advertisements were watched till the impressions mark is set and will not register if the video was skipped in between.

The data shown here is the number of times viewers clicked on the LEARN MORE button shown during the advertisement.

Similarly, Click’s data is also graphically represented in the graph below which is broken down into days selected above in the search, and when clicked or hovered over the bullet points it displays the info collected for that particular day.

On the campaign analytics page, there are two maps shown as one represents the viewer’s location where impressions were registered and the second is from where the viewer clicked the advertisement.